A tale of two Chouts

The Ultimate Indian Motocycle Hybrid, the marriage of a vintage Scout frame with a Chief engine!

The essence of motocycle, picture a rigid framed vintage roadracer, leaf sprung fork, single pan saddle, hand gearchange, foot clutch, left hand throttle and the biggest production Indian engine of the time shoehorned into the best handling Indian frame of All time! A true hotrod, the looks of a stripped down wall bike on steroids!

Yesterday, i collected the Chout from Foss Fabrication where it had been sitting since september 2012. Richi had been commissioned to make good the frame crosstube, make up a set of stainless pipes following my foam templates, fabricate the kicker mount and brake torque arms and linkages. He also designed and made the shifter, modified and mounted the footboards and made up a mudguard stay for the rear.

Now i have it home ill pull out the powerplant for final assembly then deliver the frame back to Fossfab to let Richi weld the inner side of the kicker mount.

Ill need to build the transmission into a better case that i have as the existing one needs many repairs, then its time to build up the primary, fit a King clutch, then put the powerplant back into the frame for final build up.


- Posted using BlogPress from my iPhone 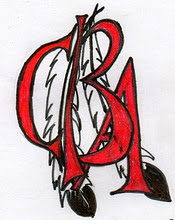 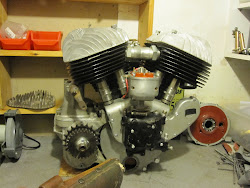 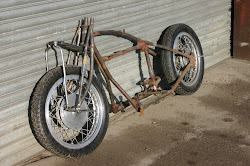 Steve Plowman
Born and brought up on the north side of Glasgow, gradually migrated north to the Highlands over the last 25 years. Been buying, selling, building, breaking, fixing, riding and pushing old bikes and cars about for as long as I can remember. I always wanted an Indian, ever since I saw one as a teenager at a classic bike show near Glasgow. In 2005 I started to gather parts to build a 57" Stroker Sport Scout, the Scout finally was on the road in Spring of 2011. Next.... a 1200cc Chout, a 1940 74" Chief motor shoe horned into a modified 101 Scout frame .. watch this space!